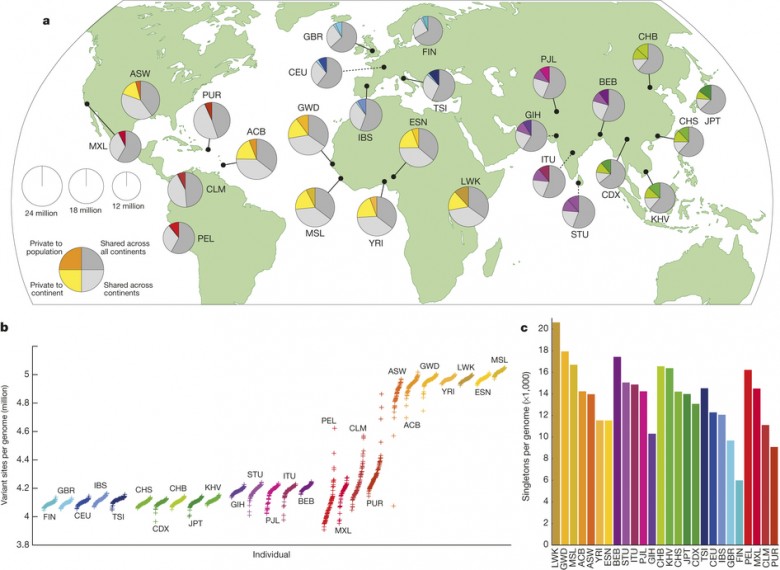 October 1, 2015
ResearchComments Off on The 1000 Genomes Project Reveals Global Insights on Genetic Variation

This month, two publications appear in a special issue of the journal Nature celebrating 25 years since the launch of the Human Genome Project and marking the completion of The 1000 Genomes Project, launched in 2008. USTAR Center for Genetic Discovery investigator Gabor Marth has contributed to both the Human Genome Project and the 1000 Genomes Project during his career, and these two publications mark an exciting time for the Marth Laboratory, the USTAR Center for Genetic discovery, and the study of heritable human disease.

The Human Genome Project produced the first complete sequence of all 2 billion base pairs in the human genome.  The sequence generated by this project has revolutionized the way biomedical researchers work and study today.  However, the single “reference” sequence does not accurately capture the wide range of genetic variation that exists in human populations.

The 1000 Genomes Project has furthered the work begun with the Human Genome Project by reconstructing the genomes of 2504 individuals from 26 international populations and characterizing the common genetic variation that exists between individuals and across global populations, including single nucleotide polymorphisms, short insertions/deletions, and structural variants (read the paper here). A second study (read the paper here) further characterizes the structural variation found in the same study group and describes eight classes of structural variants stratified across global populations.

Together, these two studies comprise a powerful resource for researchers.  They represent a significant leap in our understanding of genetic variability the architecture of the human genome, and will help researchers determine the genetic basis for disease.