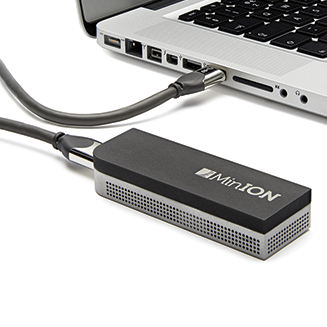 July 18, 2011
Comments Off on A Reference Bacterial Genome Dataset Generated by MinION

The MinION™ is a new, portable single-molecule sequencer developed by Oxford Nanopore Technologies. It measures four inches in length and is powered from the USB 3.0 port of a laptop computer. The MinION™ measures the change in current resulting from DNA strands interacting with a charged protein nanopore. These measurements can then be used to deduce the underlying nucleotide sequence.

We present a read dataset from whole-genome shotgun sequencing of the model organism Escherichia coli K-12 substr. MG1655 generated on a MinION™ device during the early-access MinION™ Access Program (MAP). Sequencing runs of the MinION™ are presented, one generated using R7 chemistry (released in July 2014) and one using R7.3 (released in September 2014).

Base-called sequence data are provided to demonstrate the nature of data produced by the MinION™ platform and to encourage the development of customised methods for alignment, consensus and variant calling, de novo assembly and scaffolding. FAST5 files containing event data within the HDF5 container format are provided to assist with the development of improved base-calling methods.